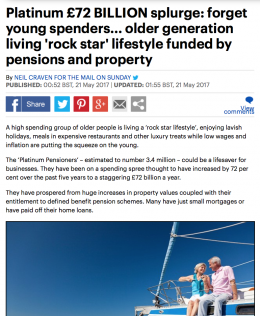 UK retailers are faced with a difficult situation in 2017 and 2018, with the exciting younger customers they would like to court, the Millennials, desperately short of cash but ‘yesterday’s consumers’, the over-65s, more flush than they’ve ever been. These are the findings of a report* from research company ConsumerCast, due to be published next week.

The trend is bad news for retailers like Next, Primark, IKEA, Sports Direct and even Asda, who target family age and younger consumers and so have limited appeal to older shoppers. They will only be able to grow by trying to boost share in a market that is stagnant or shrinking. On the other hand, retailers like Waitrose, John Lewis, Marks & Spencer and Morrisons, with large numbers of older customers, could potentially benefit from a continued rise in their spending, even when adjusted for inflation.

The squeeze on younger households has already hit their spending over the past five years. Between 2011 and 2016, according to the report, under-30s accounted for just 2% of total spending growth, against 38% for 65+ households, 34% for the 50-64s and 25% for the 30-49s. The impact of low wage growth coupled with working age benefit cuts and rising housing and education costs on younger consumers has made itself felt across a wide range of areas. Spending by under-30s households on alcohol, transport (including the purchase of cars) and recreation and culture, covering everything from hobbies to package holidays, has actually fallen since 2011, according to ConsumerCast estimates using official government figures.

Meanwhile, over-65s, supposedly ‘yesterday’s consumer’ have seen their discretionary spending boom, accounting for 48% of the growth in household goods and services and 52% of the rise in expenditure on recreation and culture.

The report identifies a new class of consumer, the ‘Platinum Pensioner’. Boosted by generous defined benefit occupational pensions, a state pension guaranteed by the government’s Triple Lock policy and additional earnings from employment following the end of the default retirement age in 2011, the number of 65+ households in the upper middle and top income brackets has jumped by 41% since 2011 to 1.5 million. These households have seen total spending rocket by 72% in the past five years, to £72bn a year, splashing out on restaurants and hotels, household goods and services, alcoholic drinks and premium foods.

Unlike previous generations reaching retirement age, they are not slowing down or downsizing their household budgets. Instead, these wealthy older consumers are spending more on ‘experiences’ as well as on goods, including cars and furniture. To them, the idea of ‘peak stuff’ is still an alien concept. Retailers need to court these customers with bricks and mortar and online stores offering high levels of service, premium quality products and not assume they want classic rather than fashionable ranges. Marketing should be aspirational, fun and avoid stereotypes of older lifestyles and tastes.

Editor’s note: ConsumerCast figures including forecasts use official, Office for National Statistics data on consumer incomes and spending as well as population projections and forecasts by the Office for Budget Responsibility for taxes, wages, benefits and inflation and data from polling by ICM Research on retailers’ customer bases. Age groups are defined by the age of the head of the household.