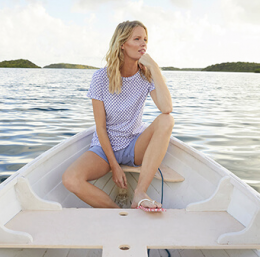 Something is happening in the wardrobes of middle-class British families and Joules, the latest premium lifestyle brand to shoot to prominence in the wake of others like White Stuff, Fat Face and Cath Kidston, is making the most of it. The trend is de-risking.

Next inadvertently picked up on the trend when it said in its full year results in March that in following its plan for faster turnaround on new trend-led product, it had neglected its provision of best-selling easy-to-wear styles. But while Next has been caught on the hop by the need for low-risk fashion, Joules has been very much on the ball. This week (6 June), the brand unveiled strong full-year trading with group revenues in the 52 weeks to 28 May up 19.6% to £157.0m, driven by an extra 11 stores in the UK and Ireland and strong e-commerce sales and wholesale. To cap that, it advised that with a higher proportion of full price sales driving up gross margins, it was looking forward to pre-tax profits “comfortably ahead” of previous expectations. In its own low key, British middle class way, Joules is a brand that’s on fire.

The reasons why lie partly in Joules’ brand positioning. It targets 25-54 year old ABC1 consumers, principally women, shopping for themselves and their families. Its values are, in its own words, “‘time-off’, heritage, Britishness, family and fun”. At a time of regular terrorist attacks in the heart of our major cities and huge worries about the economy and potential consequences of Brexit, these are precisely the themes calculated to appeal to angsty middle-class parents in need of reassurance.

On top of this, British ABC1 families are all too well aware of the precariousness of their financial situation. Those wealthy enough to have climbed onto the property ladder and not having to rent are under a huge burden of mortgage debt, only made affordable by a prolonged historical low in interest rates. According to ConsumerCast figures, some two thirds of all interest payments are made by 30-49 households, with a huge bill of £38.5bn a year. This is down from a massive £68.0bn in 2008, demonstrating the massive and concentrated support this demographic group has had from lower interest rates since the financial crisis. Last year’s Bank of England base rate cut from 0.5% to 0.25% helped lighten this load further, but it amounts to the draining of the last drops in the financial barrel. With continued apprehension about looming economic risks and inflationary pressure starting to rise again, the red warning lights are flashing brightly over many families’ finances.

In this context, Joules’ other strong suit lies in its product development. It focuses on low fashion risk product, with two thirds of its designs being ‘core’ based on previously successful lines. It is also diversified in terms of percentage of sales by style, balanced in terms of share of seasons in turnover and also heavily geared towards ‘transitional’ product that takes into account the vagaries of the UK climate. However, it avoids dullness through heavy creative investment (with a team of 31) with an emphasis on unique prints, interesting colours and design details, backed up by a focus on quality.

In a period of intense risk and uncertainty for British families, Joules is offering the right balance of quality, reassurance, interest and fun without any tricky and temporary trends that could make something unwearable for more than one season, particularly if the weather changes and it has to go back in the wardrobe till next year. It’s a brand that should be forcing M&S, Next, Debenhams and anyone else focused on this demographic to sit up and take note.