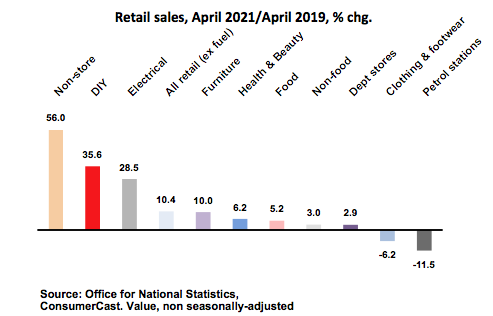 April’s reopening of non-essential physical retail (12 April for England and Wales, 26 April in Scotland) provided the boost everyone expected, with non-fuel sales up 10.4% against April 2019.

Comparisons are hugely complicated, but despite the Easter date shift (21 April 2019, 4 April 2021), which flattered the figures from two years ago (this year’s Easter spending fell in the ONS’s March figures), the 2019 comparison remains the best. Despite mathematical methods applied with seasonal adjustment, what was bought in shops or online during April 2021 can simply not be compared with that bought in March 2021, February 2020 and certainly not with April 2020, when the nation was in full lockdown and non-food physical retail largely closed. The actual products sold will often be different in many different categories, from grocery to fashion and DIY, so making a nonsense of any mathematical adjustment, however precise.

The message of the ONS figures, however imperfect, is that UK consumers are still focused on their homes, albeit starting to come out of their shells. Helped by an enormous property market and home improvement boom, electrical and DIY stores enjoyed massively strong trading, as the latest figures from B&Q and Screwfix owner Kingfisher demonstrated. Furniture sales also jumped, as customers were able to go in store and see big ticket items in person before buying. However, online still did most of the heavy-lifting in boosting non-food sales.

Meanwhile, the sector hit worst by the Covid-19 pandemic, fashion, showed signs of a recovery, but remains 6.2% below where it was two years ago. Health and beauty, another sufferer of Covid lockdowns and masking in particular, bounced back as consumers started to socialise again and head back out to face the outside world.

As expected, food growth tailed off, to 5.2% growth, even though indoor hospitality remained closed during April, But overall there is no doubt these are strong figures and probably on an underlying basis, excluding Easter shifts, growth is more vigorous than it seems.

The UK government’s mixed messages on foreign travel and the final stage of opening up make forecasting retail sales an even trickier than normal business but the most likely trends are the following:

– Spend continues to be diverted from travel abroad back into the UK market, as uncertainty about testing and quarantine regimes remains; This is a huge area of expenditure, with around £100bn related to foreign holidays in 2019, including fares, accomodation and other spending (ConsumerCast figures).

– Despite the punchy and upbeat messages being put out by grocers, their sales start to flag as consumers tire of eating at home and head out to restaurants and pubs to eat. With food retailers making up over two-fifths of retail sales this, by contrast, is likely to dent the sector’s performance significantly;

– As consumers head back outside their homes, at least in the UK, hospitality and leisure spending will boom, probably at the expense of home improvement, as attention focus shifts.

– Fashion will finally, and probably belatedly, boom and retailers will need to keep steady nerves through the current period of bad weather to make the most of full price turnover in late May and into June to avoid discounting too early.

As the varying impacts of the Covid crisis evolve for UK retail, Summer 2021 is likely to be a game not just of two halves, but about four. (Who said maths wasn’t my strongest point?)